Our Mission: To represent the sole interest of our clients by redefining independence.

Our Vision: To be a transformational organization viewed as the leader in our industry.

Our Values:
Service – Put the needs of our clients, co-workers and community above our own
Excellence – Always pursue perfection
Humility – Demonstrate modesty, respect and introspection
Integrity – Be honest and ethical in all circumstances
Positive Attitude – Disposition of optimism and encouragement

Private Investment Terms We Shouldn’t Just “Nod Our Heads” At

Many professions have their own expressions and acronyms that are freely used to communicate effectively with other colleagues and industry participants. This specialized diction creates an obstacle that hinders understanding for non-industry professionals, and when asking questions feels uncomfortable or difficult, “head-nodding” often ensues, and that action outwardly implies comprehension. Unfortunately, the financial services industry not only lacks simplicity, its complexity is sometimes viewed as a quality.

Nowhere is this language and understanding gap more evident than in the world of closed-end, private investments. Unfortunately, as more portfolios allocate capital to these types of vehicles in a quest to overcome predications of lower public markets returns, the barrier becomes more pervasive.  Three terms that commonly get thrown around when reviewing these types of investment structures are: hurdle rate, carried interest (carry), and catch-up.  This trifecta of terms is standard jargon for closed-end vehicles, but they have real world implications on the level of return investors are entitled to receive versus what they think they should receive.  We’re going to use the remainder of this blog to define these terms using basic terminology and math. 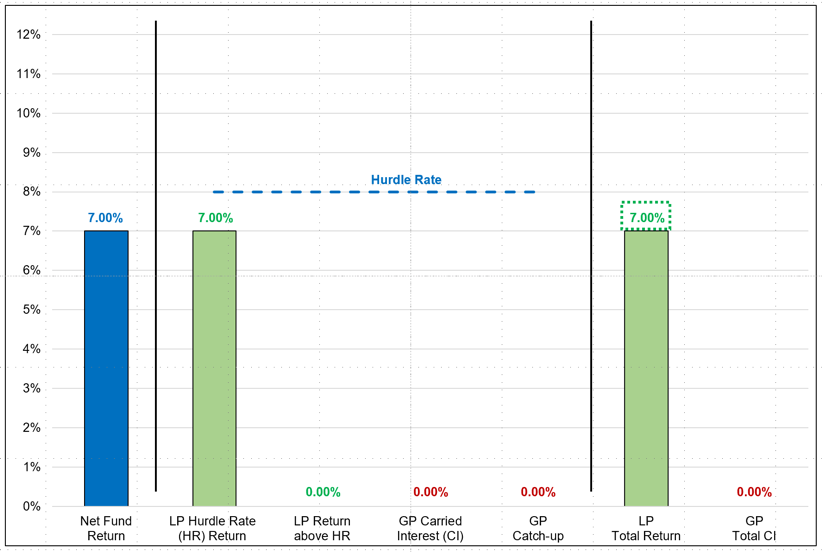 Using a basic example, a fund that posts a net return of 11.0% over its life that has an 8.0% hurdle rate and 20% carried interest would provide a total return to limited partners of 10.4% (Figure 2*). 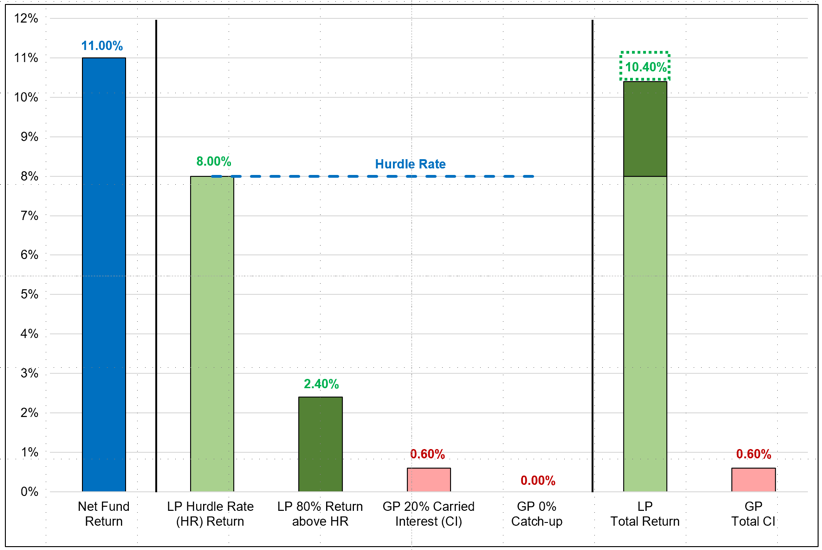 This explanation, while factual, doesn’t sufficiently explain the provision so an additional example will probably help. 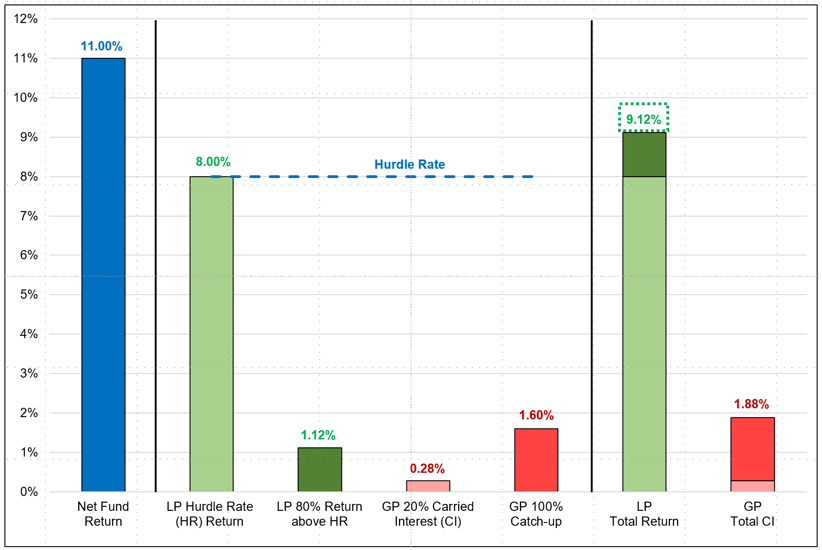 What happened to the remaining 1.6%?  Because the general partner had a 100% catch-up provision, they were entitled to 100% of the excess return above the hurdle rate of 8.0% until they received 20% carry (or 1.6%) on the first 8.0% return already paid to the limited partners.  This means the 1.6% of excess return between 8.0% and 9.6% was earned solely by the general partner as “catch-up” carry.  The limited partners do not receive any additional return over their 8.0% hurdle rate unless and until the fund’s total return exceeds 9.6% at which point, they begin earning their 80% split of additional excess returns.  As a result, even though the fund earned 11.0% net of fees, there was only 1.4% of excess return to split above the hurdle rate and the general partner’s catch-up provision, resulting in the previously stated total return of 9.12% (8.0% + 1.12%).  This also means the general partner earns carried interest of 1.88% (1.6% + 0.28%) on the fund in this example.

These examples barely scratch the surface of the complexities associated with many private vehicle structures but hopefully these brief descriptions of some common terms help clarify some of these concepts and the math behind them.  At a minimum, it should prove the old adage that the only bad question is the one you don’t ask.  Challenge yourself to avoid being a “head-nodder”.

*The above charts represent hypothetical scenarios, which are for illustrative purposes only, and whereby actual outcomes could differ from those presented.

The views and opinions expressed are solely those of AndCo Consulting. These statements are not guarantees, predictions or projections of future performance or of any outcome. This should not be regarded as investment advice or as a recommendation regarding any particular course of action.

This document has been prepared for informational purposes only, and is not intended to provide, and should not be relied upon, for legal or tax advice. The material provided herein is valid as of the date of posting and not as of any future date, and will not be updated or otherwise revised to reflect information that subsequently becomes available, or circumstances existing or changes occurring after such date.

Certain information is based on sources and data believed to be reliable, but AndCo cannot guarantee the accuracy, adequacy or completeness of the information.